Ever been confronted by a child who wants something…really badly? How many times did the child get what he/she wanted? More times than not? That’s because children possess a skill that most of us have lost a long time ago…the ability to be relentless while still being likable, even lovable!

Why Children Would Make the Best Salespeople

Why do people say that children make the greatest salespeople?  Because they are relentless! Does this scenario ring true to you:

Death of a Salesman…Giving Up

Be Relevant and Persistent

Our job as salespeople/consultants is to be persistent, yet likable. To succeed at persistence, it’s essential to capture what’s important to your client. You need to play back to him/her what their challenge was to prove you’ve heard them. “You said that growing your West Coast division is mission critical.” Then, you create legitimate touch points that serve your client and illustrate your desire to resolve what your client said was keeping them up at night. “With the program I’m recommending, you can start building the West Coast division, see some quick results and grow it steadily over the next 3-5 years.” You’ve just become relevant in his world and you have his attention.You must be able to defend each touch point to your client. That way, they can see and appreciate your empathy.

And DON’T GIVE UP! Be the one of the last nine salespeople your client has seen who actually wins. 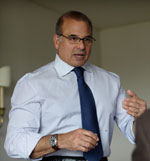 Sales…Love It, Don’t Leave It

Account Management IS Sales Management To Lead, Don’t Be a Friend…Be Frank
Scroll to top